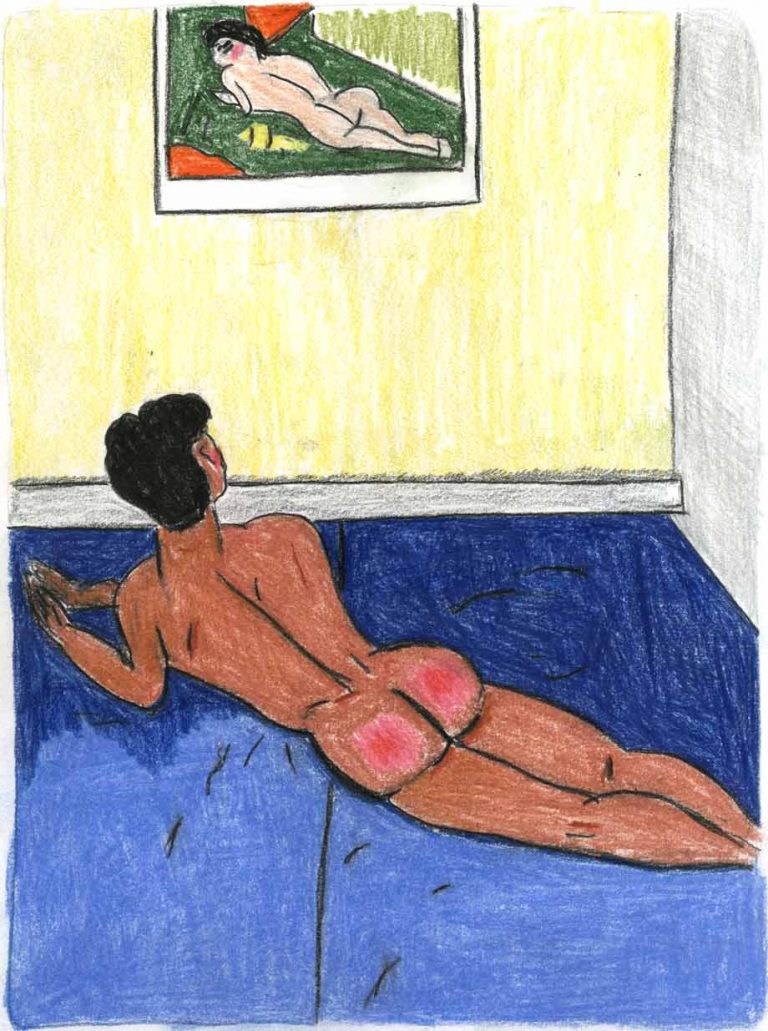 «His gaze was not someone else’s: it was my own that I was meeting in a mirror, inadvertently and in a state of solitude and self-oblivion.” — Jean Genet.

Praz-Delavallade Paris is proud to present Soufiane Ababri’s first exhibition at the gallery. Ababri was born in Tangiers, a city famous for its verbal jousting which was observed by many a wandering author and immortalised in the works of Ginsberg, Burroughs and Kessel. He brings to bear on Tangiers what Genet called his “magnifying judgements”, in this case an outlook that transforms the reality of East and West and which is asserted in Ababri’s aesthetic and literary choices.

It is easy to imagine the artist giving into the pleasure of simply wandering, catching unposed, candid photos (in moments of Genet-like complicity) of fleeting fragments of desire to inspire his drawings; sketches that portray his favourite themes that are seemingly thrown in the observer’s face without regret. Right from the start, it’s all about virility, but a different kind of virility, an abrupt analysis that goes from dialectic to tragic thoughts. “I think a lot about the role violence has played in the history of forms and the mechanisms of domination and how I can produce work that negates them”, Ababri explains.

Ababri obviously wishes to distance himself from studio work and all that this place represents in terms of the image of the artist’s power and authority based on technical skills. His work sings the praises of domesticity: it is a way of putting himself in the position of the model, those women the orientalists painted as slaves and Arabs, dominating them by having them lie in passive and lascivious postures. Ababri’s goal is to produce a militant discourse and this leads to a performative approach inspired by certain forms of resistance seen in the Afro-American and gay movements, a form of empowerment thanks to which these movements’ members took what was considered as a failing and turned it to their advantage. A political message therefore, but not one that relies on the authoritarian vocabulary of the dominant caste. Its sole weapons are coloured pencils, the prone position and drawings that address various personal themes in a sort of intersectionality combining race, class, immigration, gender, sexuality, the body and post-colonial history.

In essence, Soufiane Ababri examines the ambivalence of a society that is criss-crossed by tensions that are not so much the reflection of its contradictions, but rather of its complementarity. His heritage lies in his own story, built up by layer upon layer of personal and intimate events. A lover of sociology, Ababri’s entire body of work plays with the idea of seeing: the artist observes a world that observes him in a form of introspection combining his own unique perception, shared representations and accepted social facts in an exercise that is reminiscent of Persian miniatures and their subtle play with what is hidden and what is revealed.

Soufiane Ababri was born in 1985 in Tangier, Morocco. He lives and works between Paris and Tangier. After graduating from the Ecole Supérieure des Beaux-Arts in Montpellier in 2010 and the Ecole Nationale Supérieure des Arts Décoratifs in Paris 2014, Ababri has been exhibited in various institutions in France and worldwide. His work is included in the collections of the MAC/VAL and the FRAC Pointou-Charentes.