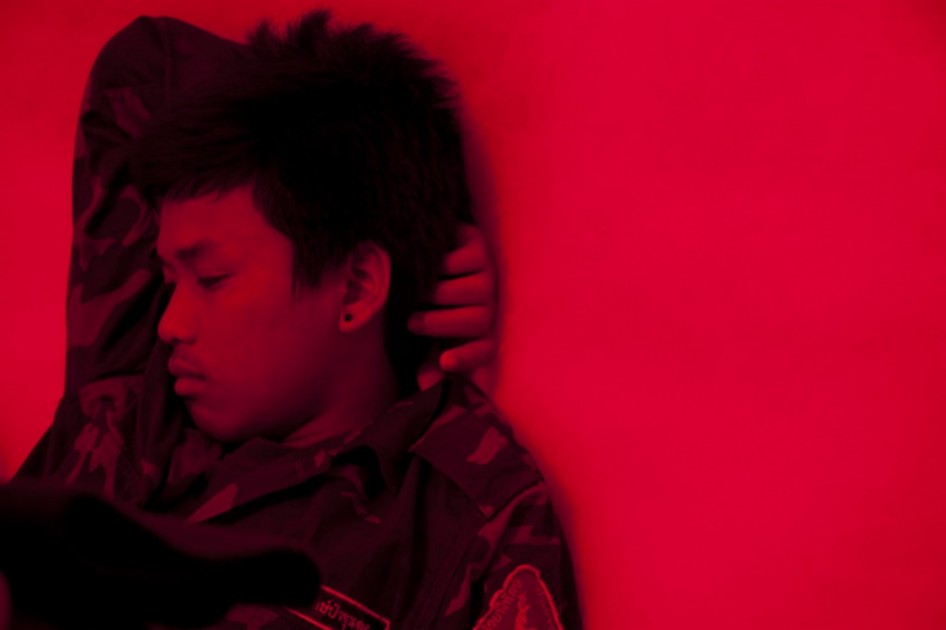 This is only a short extract, the full conversation is available in the fifth issue of Annual Magazine. Shop it here!

Sylvain Menétrey: Your latest projects seem to intertwine around each other. Primitive (2009) was a prelude to Uncle Boonmee (2010). In Mekong Hotel (2012), we see you rehearsing your aborted project Ecstasy Garden. Do you see your filmography as a diary?

Apichatpong Weerasethakul: Certainly. Lately, my interest lies in the Northeastern region of Thailand where I grew up. The works are an exploration of small cities that have unique histories, or my actors are simply from the particular towns. It’s always about a place’s collective memory.

Sylvain Menétrey: From your first feature film Mysterious Object at Noon (2000), consisting of stories collected from different people in the streets, most of your projects have been based on collaborations. Is it a way to get closer to life?

Apichatpong Weerasethakul: Not really. It is a way to get myself closer to the essence of cinema, that it is a ball of collective spirit and full of contradictions, especially regarding reality. As long as the image is framed, it will never represent life.

Sylvain Menétrey: How do spread the myths and narratives you borrow from Thai culture? Do they survive as an oral tradition? Are they still told to children?

Apichatpong Weerasethakul: We have absorbed the tales from all kinds of media, from cinema, television, radio, books, comics, etc. They are still being told repeatedly but in different style from when I was young. My nephew and I know some of the same stories, for example, but his versions may be in HD 3D.

Sylvain Menétrey: Where did the sublime scene of the princess with the catfish in Uncle Boonmee originate?

Apichatpong Weerasethakul: It was not from particular story, but I combine elements from what we call TV Royal Costume Drama; those with princes and princesses and animals that can talk. That part in Uncle Boonmee mimics and pays tribute to all of its elements – the costume, the acting, the colors, and so on.

Sylvain Menétrey: You often cite Thai soap operas as an influence on your work, can you tell us about their structures, their narratives and what interests you about them?

Apichatpong Weerasethakul: I grew up with soap operas. They have created a static narrative formula in Thai media; the classes are clearly distinct and ultra righteous. So you have city vs. village vs. rich vs. poor vs. good vs. bad vs. beautiful vs. ugly. It is amazing that these formulas are in turn represented in Thai society. We have a Cultural Watchdog under the Ministry of Culture to ban movies, songs, books, dresses. We have Internet Police that blocks Youtube, websites and puts people in jail. We have villagers building their houses to look like those in the soaps. I am inspired every day. I collaborated with an artist and made The Adventure of Iron Pussy (2003) which is full of these references.

Sylvain Menétrey: How close are you to the art scene in your country and people like Rirkrit Tiravanija?

Apichatpong Weerasethakul: I have moved to Chiang Mai in Northern Thailand for a while so I’m familiar with the young art scene and a few artists who live there, Rirkrit included. I admire how Rirkrit attracts other artists and dedicates his energy to the Land. I am more of a hermit and live in a village far from town.

— This is only a short extract, the full conversation is available in the fifth issue of Annual Magazine. Shop it here!