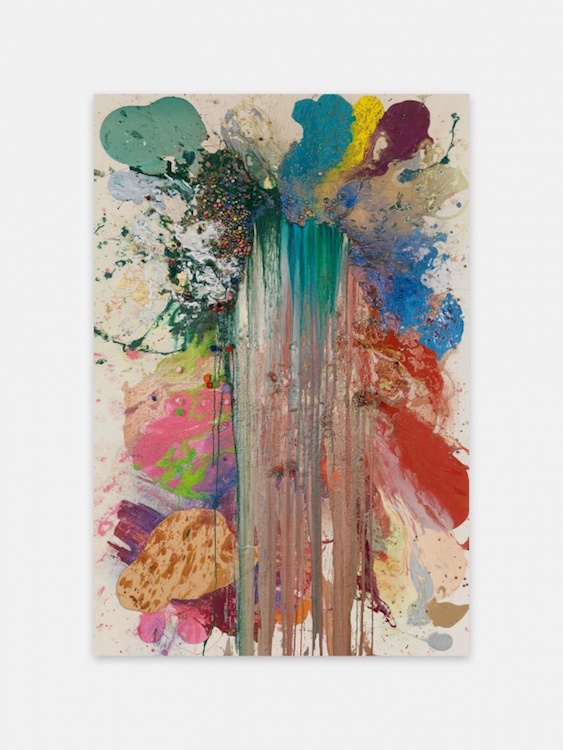 Among the works on display for the John M Armleder exhibition at Almine Rech Gallery Paris, alongside murals from 2018, is a new series of “Puddles Paintings”.

The paintings are made by spilling various materials directly onto the canvas (acrylic paint, varnish, liquids for exterior surfaces, but also powders, confetti, glitter and small ormaments). They emerge from a double random rule: first, the application onto the medium is not controlled by a movement of artistic mastery, and second, the mixing of elements causes chemical changes in their original properties, both chromatically and physically. In addition, application of the painting materials is performed flat (unlike the “Pour Paintings”, the first examples of which date back to the 1970s), and verticalization of the result, once the layers have formed, further deeply modifies the paintings’ appearance. New pleats form, iridescent grooves emerge through a layer previously covered in uncanny chromatic waves; sometimes even, “bubbles” formed on the surface suddenly burst and spill out a magma of variable density components over the surrounding accretions.

This pictorial technique, which perhaps owes as much to volcanology as to principles of random composition developed in the arts of the second half of the 20th century, allows the artist to factor in loss of control, to trigger unexpected accidents and eruptions, or in short, to combine John Cage’s “letting go” with a form of expressiveness stripped of subjectivity.

Leo Steinberg traces the invention of the “flatbed picture plane” to the 1950s, and ascribes it to both Robert Rauschenberg and Jean Dubuffet. The use of waste material and assemblage allowed the former to go beyond the “image” (albeit abstract) nature of any “vertical” pictorial work. For the latter, “materiological” research and a determination to “bring down” painting to the level of reality are what transform the work’s relationship to the nature/culture dichotomy. Incidentally, both artists also erased the clear delineation between painting and sculpture and blocked the “window” of representation opened in the Renaissance.

The “horizontalization” John M Armleder affirms through his “Puddles Paintings” is perhaps evocative of assemblage, but does not carry the emotional charge associated with Rauschenberg’s recycling. The objects he uses, stuck as they are in the viscosity of brightly-coloured liquids, are more reminiscent of questions of ornamentation, such as when a miniature umbrella and plastic swizzle-stick turn an industrial beverage into a “cocktail”, as their superfluous and merry nature contaminates an otherwise mundane experience. And although the colour palette and thick pictorial material in this new series of “Puddles Paintings” do indeed evoke aspects of French informel art, the works are much more reminiscent of Eugène Leroy or Larry Poons than Dubuffet. Essentially, what John M Armleder invokes is the image of a “cultural pudding”, a mix of all references, a place where all is equivalent in a substance that “gels” the most radical intents.

In a sense, the appearance and texture of his “Puddles Paintings” reflect a cultural theory he has been developing and putting into practice for decades. In the 1980s, his “Furniture Sculptures” – in the manner of Erik Satie’s “furniture music” – marked the furnishing fate of avant-garde pursuits. In the 1990s, his “Pour Paintings” and murals asserted the subjection of composition to a more or less random programme. In the 2000s, his installation platforms degraded both artistic and curatorial endeavours to “B-movie” status, where a device initially planned for a different scenario became the locus of a new realisation. Today, as we perceive the general movement in this singular body of work, we can lose ourselves in the heart of a maelstrom of forms, media, inventions and mentions, statements and references… like in Poe’s short story, we are driven to understand that the vortex engulfs all things in its swirling path. Some even think that the storm has an eye: if this were the case, it is certainly gazing upon us.
–
Lionel Bovier

Translated from french by Alexandre Carayon