One side of Broadway 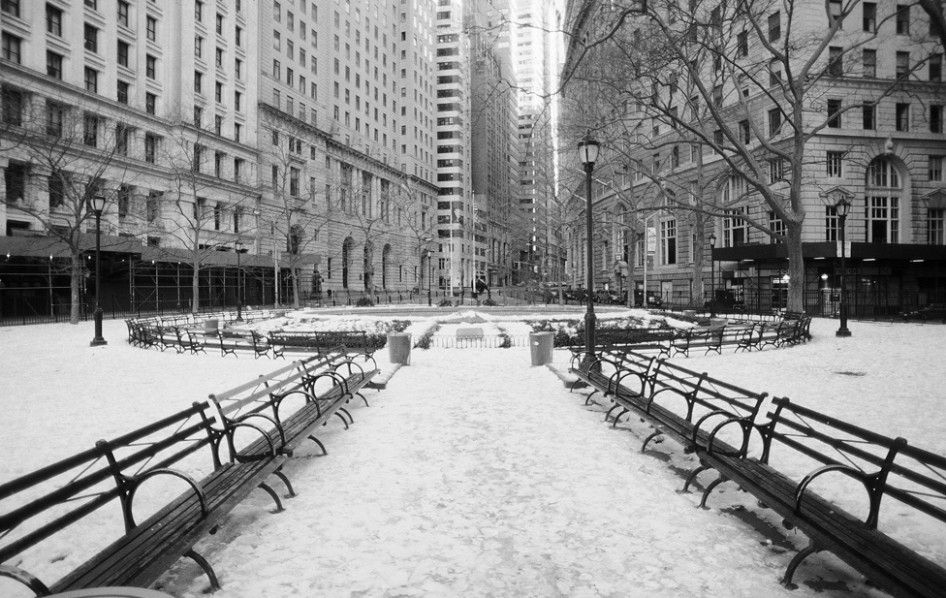 In 1910, Rudolph De Leeuw, a publisher in New York City, photographed every building on Broadway in Manhattan from Bowling Green to Central Park and published the photographs in a book called Both Sides of Broadway. In his introduction, De Leeuw did not explain his idea,
but said of Broadway itself: “I think of it all day and dream of it at night.”

Broadway, like most major routes in New York City, was built on top of a road made and used by the Lenape, the indigenous people who were displaced by the Dutch. Wall Street is named for the wall that slaves working for the Dutch built to keep Native Americans and other colonizers out of the village of New Amsterdam. Broadway begins at Bowling Green, the center of that former Dutch settlement. De Leeuw’s book begins there too, proceeding northward against Broadway’s downtown traffic. Photographs of the west side of the street are printed on the left-hand page, the east side on the right. The book’s binding becomes an imaginary vanishing point for the journey.

The pictures are accumulations of time and accidental knowledge. Invisible trams leave vaporous lines as they move past the camera’s open shutter. Most passersby are blurry and undefined—distant figures without detail—unaware of being photographed. Only those bystanders who notice the camera and remain still are in focus. 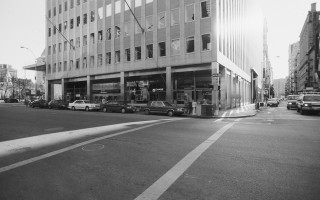 In De Leeuw’s book, photographs of Broadway alternate with pages of advertising. One ad declares: “There are 1,500 Otis elevators on both sides of Broadway.” Dr. Scott promotes his electric hairbrush. An underwear manufacturer promises its underpants “will not annoy you.” Without explanation, small portraits of world leaders and diplomats appear in the margins. De Leeuw reprints a New York Times newspaper article stating that real estate prices on Broadway are as high as $4 a square inch. Most of the advertisements are for businesses on Broadway. They appear in the book just before or after the photo of the business itself. The business signs on the buildings in the photographs have been carefully retouched to make them more legible. Different types of businesses cluster together, selling hats, typewriters, corsets, railroad tickets, rugs. But one type of business can be found on the upper floors in all the districts—the private detective or “private eye.” What can be inferred about a city where one must pay for police work out of one’s own pocket?

The Lumière brothers advertise photographic supplies on several pages. And below each of De Leeuw’s photographs there is a caption stating that the image was made from an “original Lumière Sigma Plate Photograph.” As a teenager, Louis Lumière developed a photographic process sensitive enough to stop movement. Freezing motion proved to be the key to reproducing its illusion.

W. K. L. Dickson, working for Thomas Edison, built a functional motion picture camera two years before the Lumières. The camera weighed over 1,000 pounds. Dickson bolted it to the floor of a special studio designed to rotate, following the light of the sun. The camera weighed over 1,000 pounds. Dickson built a tiny studio around it and bolted it to the floor. The small building could be rotated to follow the light of the sun. Anyone or anything that was to appear on film had to be brought into the black void of this studio. Most of Edison’s subjects were quick stage acts. The films were shown to customers, one at a time, on peepshow machines in a storefront on Broadway at 27th Street. Edison said that projecting films for audiences would “spoil everything…you could show the pictures to everybody in the country—and then it would be done. Let’s not kill the goose that lays the golden egg.”

Every film, every photograph, is a document of its own making.

The Lumière brothers’ camera weighed only 12 pounds. It also doubled as a projector. The Lumières used the illusion of motion to create spectacle from everyday life. They refused to market their camera. Instead, they sent agents all over the world, following established routes of colonization and trade, to film curious bystanders and then charge them admission to see themselves projected on-screen. These Lumière operators then copied the films and sent the originals back to the factory to be recopied and distributed to other operators to exhibit in other parts of the world. Over 1,200 films were made between 1895 and 1897.

These films were known as actualités or actualities. Each actuality lasted less than a minute—the length of one roll of film. It was an extended moment of unbroken and repeatable time, a “view” of a place or event as if glimpsed through a transparent window. The films were edited by deciding when to turn the camera on and calculating when the film would run out.

The magician Georges Méliès, attending one of the first public film screenings in Paris, found the trembling leaves on a tree in the background of one of the films more compelling than the infant being fed by her parents in the foreground. Méliès probably knew that on a sunny day the small circles of light we see between the shadows of the leaves on a tree are actually tiny projected images of the sun. Perhaps you’ve seen the crescent-shaped points of sunlight that appear on the ground during a solar eclipse.

The Russian playwright and novelist Maxim Gorky also noticed the trembling leaves behind the baby being fed, but to him they were horrible and lifeless, part of a dead kingdom of shadows, “as gray as cinder…terrible to see.”

The first motion picture film exposed in New York City was shot from a window of a building on 33rd Street looking north on Broadway. The film recorded images of traffic, passersby, and bystanders. Perhaps someone returning the camera’s gaze, curious and unaware of what she was
seeing.

When De Leeuw published Both Sides of Broadway, there were 123 cinemas in New York City. Five of them appear in his book. On the sidewalks of De Leeuw’s Broadway, men outnumber women 13 to 1. A prevalent restaurant chain named Childs operates two separate dining rooms
on Broadway where women are allowed to eat: “Childs Ladies’ Lunch.” Women were discouraged from patronizing nickelodeons, penny gaffs, shop shows, kinetoscope parlors, electric palaces, and automatic vaudevilles. They were warned that they might be recruited for prostitution there, and men were cautioned that lone women at the cinema might be prostitutes. But once a woman did make her way inside a darkened cinema, she was in one of the few public places where she could avoid the gaze and scrutiny of others.

Actuality films used vision to confuse the other senses. Each one-minute actuality was a discrete event exciting different, unrelated sensations. Soldiers charging on horseback might be seen just before or after ocean waves crashing against a pier. A short piece of black film in between each
actuality threw the room into darkness. Films were shot from moving cars and trains. Some cinemas were built to look and feel like train coaches. “Conductors” took tickets and announced locations appearing on-screen. The people in these films often ruptured time and space by looking directly into the camera. Other films like Cecil Hepworth’s How It Feels to Be Run Over made audiences identify with the camera’s point of view. Conservative reform groups tried to close cinemas, claiming the lack of a “story” made film “unnatural.”

By 1901, producers were editing actuality films, advertising that “all the least interesting portions have been removed.” In 1906, for the first time, more “story” films were produced than actualities. By 1910, when De Leeuw photographed both sides of Broadway, fictional film characters “spoke” to each other through written dialogue. Actuality filmmaking ceased.

The overlapping field of vision of our two eyes creates a three-dimensional perception of the world in our minds. We are inside these images of the world, which, in turn, are inside us. We trust these images because they give us timely information. And just as we connect the image of one eye to the other, we also connect the images of one place to another and one day to the next.

In January 2000, after I discovered De Leeuw’s Both Sides of Broadway, I walked from Bowling Green to Columbus Circle, photographing all the buildings on one side of the street.

At 27th Street, a bystander became suspicious of me and told me I could not photograph there. As I pressed the shutter, he shoved me, pushing the camera into my face. In the time since I took these pictures, it has become illegal to photograph several of these buildings.

« But how do you render events? How can you say exactly what happened? Are these the words and images to use? Are there no others? Am I speaking too loud, looking from too far away, or too close? For instance: the leaves on the trees. Should I talk about the people or the leaves? Or is there possibly a way to speak of both at once? Let’s say that both, on that afternoon, trembled slightly. »