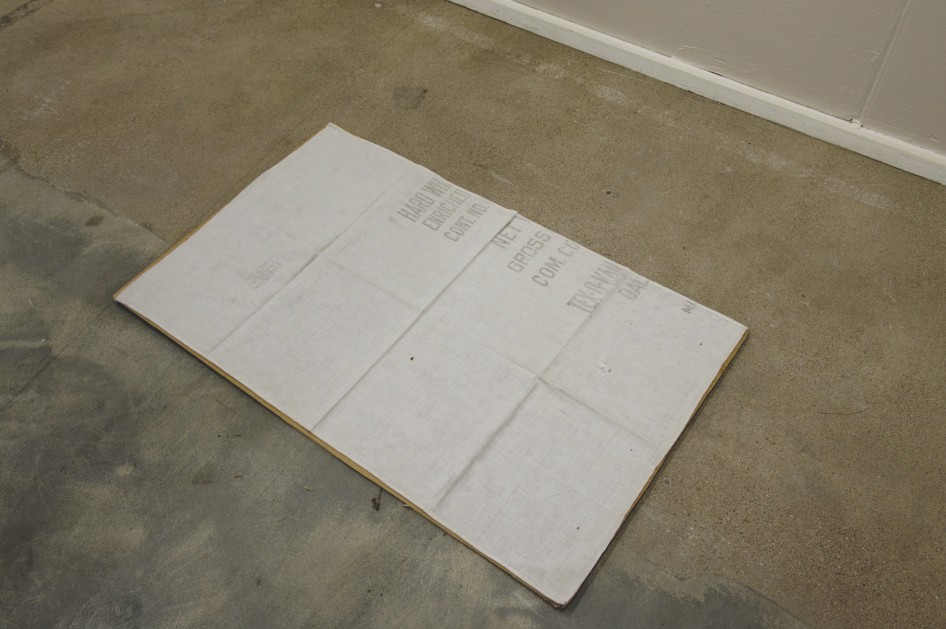 Outer reticence to achieve internal expansion: these words could be used to characterize Vittorio Santoro’s four-part installation Une certaine idée de l’histoire de mon père, I–IV (2013). The sculptural elements of the installation—two windows, slightly treated, a split-flap display with 40 lines of text in Italian, and a washed out cotton sack placed on the floor—are arranged in such a way that the beholder only discovers them gradually, these apparently ordinary objects that seem almost absorbed by the white surrounding space. The sack, once a container of flour, still bears traces of washed out English writing, which in turn refers back to the Marshall Plan from the period directly after the Second World War. The one window frame is painted with a mixture of transparent acrylic resin and crushed aspirin—the granulated surface attests to the latter—while the other window frame is coated on the front with a layer of titanium white paint, abolishing all traces of time and use. This further amplifies the subtly dramatic impression of the hanging light bulb: it would burst if someone pushed against the slightly open window panel. And what can be found on the rectangular chalkboard wall surface that appears framed by the other window? Only traces of blurred notations. Not to guess the significance of signs and gestures, but to draw attention to the blurring itself: effacement, dissolution, void? In Santoro’s work, the ellipsis often comes to bear as an aesthetic principle, the result of a duel that Santoro stages between language and image (and not just a formal tendency), or, in other words, a chess game in which the two media stubbornly challenge one another. It is only in this sense that Santoro’s installation speaks of a “certain story of my father.” Accordingly, it is pointless to seek out a narration with biographical aspects. The installation makes “the idea” of a story or a history manifest, that is, not an individual fate, but a certain type of experience that can be realized as a possibility again and again, and which threatens the notion of substantial identity. The specificity of fate is made unrecognizable because it can be spoken about only in this way—in an atmosphere of paused movements, barely visible text, and half-hidden signs. Thisanonymous presence no longer speaks the language of humanity, but the language of the outside: as if in the desert, where experiences of limits and breaking beyond those limits dominate: parlare al deserto, we read in the split-flap display, whose texts clatter down with a slight sound and at irregular intervals. This language is mumbling, stuttering, fragmented signals, and broken narrative: “a human sign, and then,” “being alone,” “night and day,” “bareness,” “misery,” « and then », « absolute clarity,” “beyond the sea,” “at the end of pain,” “the banality of these years.”