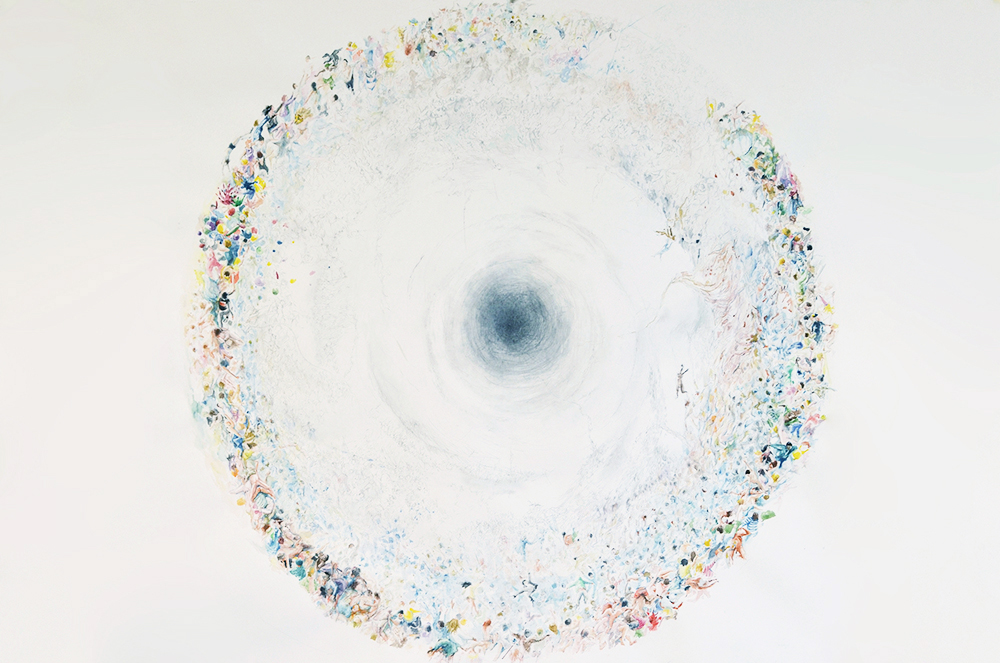 Carried along in the furrows of coloured waves, the gaze gets lost in black punctuations stippling the work. However, splashing and springing colors leave a muddled impression: their swarm wipes out the spontaneous gaiety they spread. This movement, far away from being euphoric, draws a wave of panic from which black-haired heads try to escape. From the body accumulation emerges an harrowing suffocation, the individuals are lost in a confused crowd, fighting for their survival.

Viet Bang Pham took Leiko Ikemura’s classes in Berlin University of Arts (2004-2011). During his training, he decided to leave one year to study in Vietnam, where he hasn’t been back since the age of 9. His work has been enhanced by this experience in his country of origin, which has been marked by two decades of war.

In Viet Bang Pham’s drawings, the characters are blown away by a swirls of a terrified crowd, some of them leave the mass, as if they have been thrown by an explosion. In this crepuscular and apocalyptic atmosphere could suddenly appear the threat of bombardment or resound enemy troops’ footprints. The acute awareness of humanity disasters is shaped by the chaos state : the artist spreads fragments of History through the superimposition of traumatic and culturally permeated images.

Drawn with a nearly Boschian meticulousness, the scenes form a theater whose imminent last act sounds the threat of civilisation disappearance. Through his consciousness of finiteness, Viet Bang Pham creates and destroys devils, torments and plagues. The ghosts of human traumas drag around their rags of desolation, warning us with indulgence that the dust of passing years is the antechamber of a sluggish memory. «Man really has a past if he is aware of having one […]. Otherwise, individuals and societies carry along a past they ignore and passively suffer…»1 From the ancestral anxiety to endure Gods’ angers and their raged elements to the human self-destructive tendency in the quest of power, the artist shapes the background of generational dreads, as the burden of an exhausted Atlas.

Kids’ rosy-skinned shoulders carry war weapons (Kid soldiers, 2013), the accumulation of individuals becomes a mass grave (Haufen, 2012), and a colored round dance is absorbed by a vertiginous abyss (Great Ring, 2015). Humanity is no longer a whole, neither a collective being, here humanity’s viscera beat at the pace of tragedies. Viet Bang Pham pays attention to each character’s details. From this viewpoint, human scale prevails over the masses.