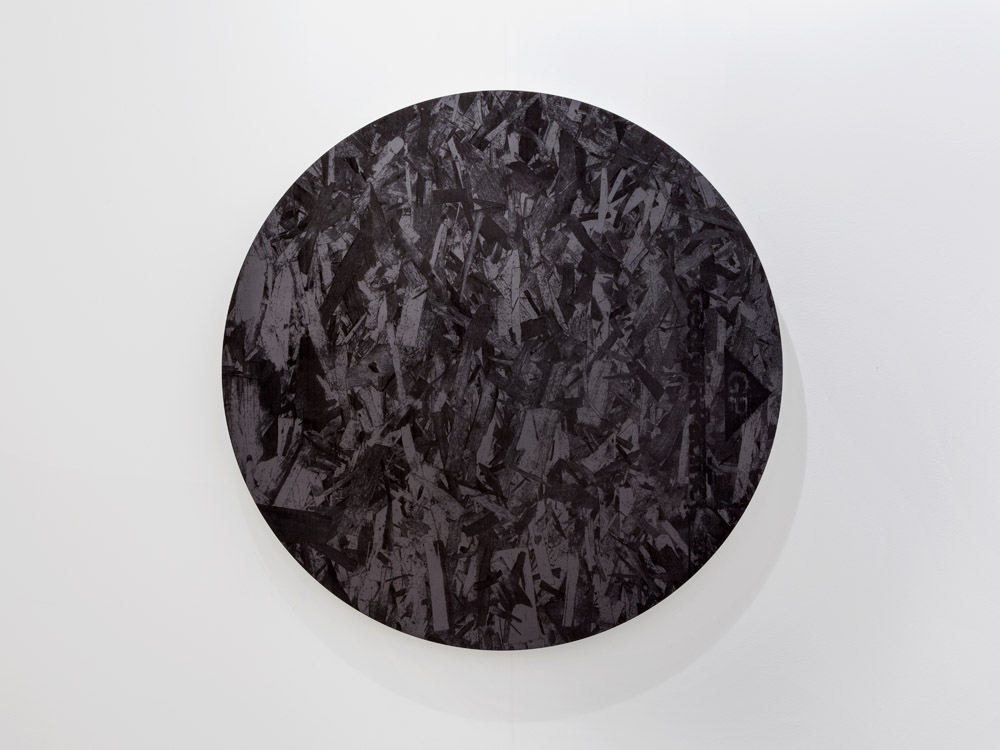 Art : Concept
4 passage Sainte-Avoye, Paris
0033 1 53 60 90 30
www.galerieartconcept.com
Adam McEwen
(b.1965 London / lives and works in New York)
Adam McEwen has gained international recognition with the creation of a wide variety of works that
draw their inspiration from popular imagery, historical events and the quotidian features of the city
– specifically New York City. From WWII to the present, McEwen draws a personal link between his
vision of capitalist development and its continual reinvention. Through his work, he looks at historical
narratives from his own perspective and in doing so, hopes to unsettle the viewer’s perception of media
coverage and tools of mass communication.
Adam McEwen uses graphite to reproduce objects as familiar as an air conditioner or water fountain.
Shaped in the style of industrial objects, they are distributors – of water, conditioned air or banknote
– or surfaces – a wood or metal panel. Being pure carbon, graphite is of course an ingredient of the
lead in drawing pencils. Adam McEwen’s graphite works produced from reassembled scraps have a
monolithic aspect that does not erase their infinite constituent interstices. Graphite is especially used in
the manufacture of missile launchers, making this material and this kind of shaping highly ambiguous.
Alexandre Singh
(b.1980 Bordeaux / lives and works in New York)
La Tour Bouchon
, Alexandre Singh’s new project, presents a complex and multi-referential work,
encompassing drawing, collage, watercolour, and sculpture.Following the successful presentation of
his debut theatre play The Humans at the 2014 Avignon Festival, Alexandre Singh wanted to conjure
up a similarly rich and imaginative world in two-dimensions. As ambitious as the work is in scale and
complexity, it has at its genesis an absurdly simple conceit: what if the Eiffel tower were shaped like
a gargantuan wine bottle-opener? Inspired by the paintings of Jan Brueghel the Elder, Alexandre Singh
presents the imaginary construction of this Tour Bouchon over the course of four seasons. The first
panel begins the story in the autumn of 1887, as a foggy forest is cleared by lumberjacks whilst the
tower’s iron girders are erected against a smoke-choked sky. Following the snow-bound winter of 1888

(depicted in the second panel), we find ourselves in the spring of 1889 at the

opening of an alternative
‘Exposition Universelle’. With the tower almost complete, an overeager crowd presses itself against the
barriers of the ‘Parc Technologique’ to gawp at the fictional contraptions on display.
Caroline Achaintre
(b.1969 Toulouse / lives and works in London)
Caroline Achaintre’s work encompasses a diverse range of media including textiles, ceramics, woodcuts
and watercolours, using techniques typically associated with the applied arts. Her sculptures, hand-
tufted wool wall-hangings, drawings and paintings are colourful and potent, evoking the subversive
spirit of European carnival and creating an atmosphere that is simultaneously playful and absurd. Citing
German Expressionism, post-war British sculpture and Primitivism as influences, her work also makes
reference to more contemporary sub-cultural strands of sci-fi, the Goth-metal scene, psychedelia and
horror films.
Julien Audebert
(b.1977 Brive la Gaillarde / lives and works in Paris)
Julien Audebert’s work escapes the simple catalog of recipes, exercise or technical demonstration. Feasts,
black drop, traps, third hand, are all subjects of the object «painting», through the mediation of the
pictorial. What is the black drop effect? Neither more nor less than an optical phenomenon, a diffraction.
The term «black drop» is partly chosen for its graphic resonance in reference to this phenomenon of
diffraction found in particular in scale aberrations or the duplication of certain characters.
Miryam Haddad
(b.1991 Damascus/ lives and works in Paris)
Young artist, freshly graduated from Les Beaux Arts de Paris and settled in France since 2012, Miryam
Haddad presented her first solo exhibition at the gallery Art: Concept, Paris between January 27 and
February 24, 2018. In a mixture of triviality and fantasy, apparent naivety and melancholy, these
characters camouflage and exacerbate a reality too ugly and cruel to be represented. The human figure
is also treated in a rough way, deformed or summed up in a few convulsive brushstrokes that evoke the
tormented traits of painters such as Chaim Soutine, James Ensor or Marwan Kassab Bachi. Unburdened
by the pessimism of those who inspired her, Miryam Haddad claims, however, the positive
Close