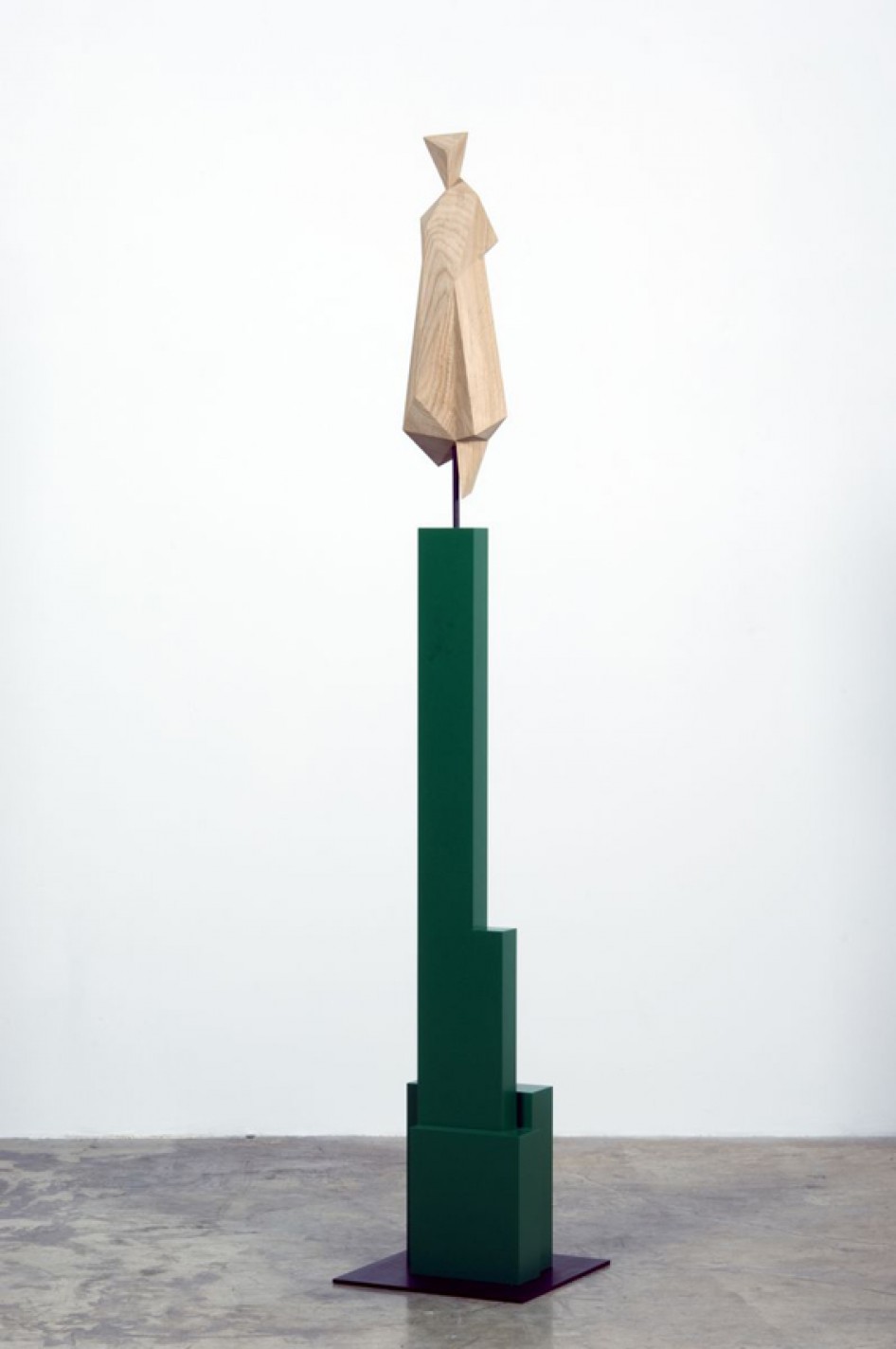 Timothée Chaillou: In the gardens of Versailles in 2009, you presented sculptures of architects who are important to you, using ‘pedestal frames’ – hollowed pedestals with only the framework remaining…

Xavier Veilhan: It was a way of putting sculpture in the air, on air. I didn’t want to block the perspective of the Versailles gardens with their formal French rigour. I wanted to have the least possible impact on the site. As you said, the bases were ‘pedestal frames’ – some slanting, some straight – giving the support a feeling of movement and uncertainty, like a shape going round a bend.

Timothée Chaillou: Is using the podium a way of being more legible – a form of pedagogy for the eye – aiming for everything to be shown in the same restricted space?

Xavier Veilhan: I try to create art lacking any sort of pedagogy, quoting from the history of art in a way that avoids such quotes being used as props or ‘crutches.’ I am very wary of a pedagogical approach and would like to think that art helps circumvent it. In my work, I am keener to withdraw and take away reality from a place, to create a space – like a hanging garden – where sculptures take off and float in the air. In Baron de Triqueti for instance, I was interested in the potential links between classical sculpture, a César Expansion and a piece by Bertrand Lavier all shown together on the same podium. The links appear once we start to move these objects away from both the venue and the surrounding influences. The podium space becomes these works’ own space, specific to their relationship with the viewer: a space that is its own stage. This is not a stage requiring an audience; everything happens within the space itself. I like this idea of the public being physically involved, having to climb up steps to have access to the sculptures. It’s the same with Le Mur de Verre as, to see both sides of the photographs, you have to go around to the other side of the wall. I’m just trying to create ways of seeing works differently while having a new understanding of the reality that surrounds them.

Timothée Chaillou: The podium is a place of power, competition, emphasis and authority. Why do you use this type of presentation? How do you get around these connotations?

Xavier Veilhan: It’s about the political aspect of celebrating or drawing attention to someone. When we commemorate public figures, we put them on a pedestal. This is the physical process of crystallizing the person concerned. The political idea is the choice of the person we want to erect a statue to. Sometimes statues are built in honour of dictators while scientists are forgotten. That’s distressing. So there is inevitably an ideological aspect to the idea of the pedestal. And at the same time, there is the natural inclination to get up on a table and start talking. My work does not just involve highlighting items with a commercial value or creating competition between them; I do not try to ‘get around’ the connotations of power and authority – they are present whenever I create a sculpture. I have already exploited these notions of scale and power. Felix Gonzalez-Torres’ go-go dancer on a podium (Go-Go Dancing Platform, 1991) is a form of energy; it’s not involved in a competition. It represents the people who look at it. However, with Richard Serra and Carl Andre there is a form of authority – which is absent from Gonzalez-Torres’ work Stacks, as well. Sometimes we use the pedestal with all its ideological associations, sometimes there is no need for them.

Timothée Chaillou: Does using a podium look to reveal the actual act of exhibiting and highlighting?

Xavier Veilhan: Yes. This ties in with the idea of the power of an artistic decision, with the artist having authority. The viewer is conscious of seeing an artistic object, which necessarily implies that the object is being exhibited. The exhibition space is a comprehensive arrangement which strongly influences how the viewer will look at what is being presented. The podium is one possible aspect of the exhibition’s overall vocabulary.

Timothée Chaillou: Barthes once said: ‘Whatever the meaning, it is not things themselves, but the place they occupy that matters.’ 1 Do you agree?

Xavier Veilhan: Not really, because the importance of things remains relative. For me, everything is conditioned by the position of the viewer rather than the position of things. What Barthes says may be true if it concerns the relationship with the viewer. The place things occupy remains important, yes, but they have their own autonomy – the same sort of autonomy as words in a sentence. The juxtaposition of things interests me, providing their relationship with each other is not too intense.

Timothée Chaillou: How can a podium be used to avoid – or exploit – fetishism and objects of desire or temptation?

Xavier Veilhan: I’m a great fetishist and I don’t seek to avoid or skirt around that. It’s something I take pleasure in. For example, I like skiing for the thrill it gives me and, at the same time, I love skis as objects. I have a fetish for spheres, for perfection, for the precision of manufactured objects or animals – whose forms are so perfectly adapted to their environment. This fetishism is a way of acknowledging this balance and perfection. Bicycles fascinate me because they use as little energy as possible while gaining speed. The bike is a perfect expression of the extension of the body. I’m attracted to objects and empathize with them because their shapes adapt to our needs and bodies. We can understand their dynamic potential simply by looking at them.