In conversation with Alexandra Hopf 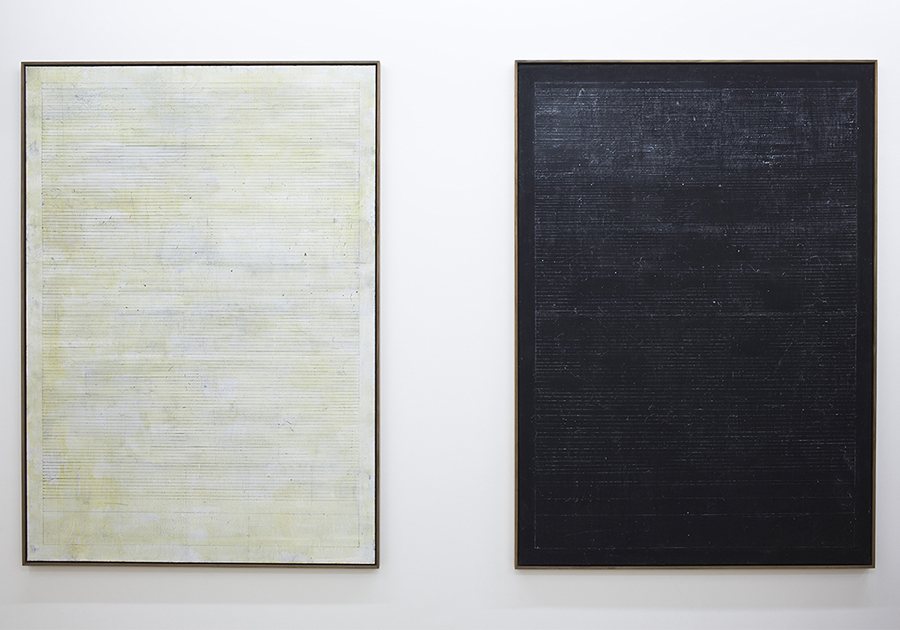 ANNUAL Magazine : Your previous show at Sobering Gallery is entitled Screen Memories (March 12th – April 14th, 2015) as a reference to Sigmund Freud’s Psychopathology of Everyday Life. Do you consider the ambiguity  of perception as an essential aspect of your work?

Alexandra Hopf : There is a dialectic reading of the screen: The screen is protective of an object or used to obscure, in the second the screen is a surface onto which images are projected, attached or reflected. In both cases the screen serves as a site of mediation. The screen memory challenges the narrative function of memory, blurring opposition between the authentic and counterfeit as a means of producing subjectivity. Yet the screen is an in-between space of projected and perceived images, the intermediate space between the eye and the gaze, causing an ambiguity in perception.

AM : Screen memories combines the clarity of the memory and its apparent insignificance although it refers to hidden fantasies of childhood.
The superimposition reveals different degrees of reading. Do you think that the main reading of the work can be found between the lines and below the layers ?

AH : Memories are tricky. We try to pin them down by creating images and narratives.
But they cannot be fixed, they are shifting. The elusive and deceptive nature of memory is part of our subjectivity. The reading takes place in between the lines and below the layers while confronting our subjective eye with the objectifying gaze or projection. This generates a multi- layered ground for images for the viewer who maps himself in it.

AM : You often use the carbon paper as a material of your work. After your work on the color, you draw lines that reveal the hidden material below the painting. How did you come up to the idea to use this type of material?

AH : I happened to find an old sheet of carbon copy in my studio dating from a time when consumer inkjet printers didn’t exist. Although carbon paper is still being used, it will no longer be produced in future. Its wax surface and fragile materiality caught my interest. First the idea of authorship and authenticity came to my mind. Is there a unique copy? Once you scratch into the paper removing the wax, you erase part of its reproducing quality. I started to entirely cover a large surface with sheets of carbon paper which then looked like a black primer. It was like starting the painting process from a reversed side. The image is the matrix.

AM : « Screen memory » suggests the idea of a memory rewriting. In a previous discussion, you mentioned the image of the palimpsest. The inscriptions on the palimpsest are erased to be written again. Is the action of covering or re-writing the main part of your creation process?

AH : The process of overwriting has two contrasting directions of gesture. On the one hand it erases the traces below in order to make a restart, to create new space, new meaning. The layers below may still be visible like a shadow left. A reminder of the realm of the ephemeral. On the other hand the gesture is still inscribed into the surface, like in a Wunderblock. Its inscriptions are memorised in multiple layers building up an invisible texture below. In opposition the idea of authorship comes up, with the repetitive lines undermining the individual gesture.

AM : Some of your works pay tribute to Frank Stella, Francis Picabia or constructivist artists. Is it a reinterpretation or a re-writing process?

AH : The two named artists as well as the constructivist Rodchenko were male key figures of our eurocentric order in the 20th century. They represent a time of various Avangarde movements.
I am interested in revisiting this era to re-investigate those concepts from a contemporary point of view having the distance of time and its socio economic and political changes. My re-construction for example suggests the use of different new materials or a reinterpretation of an existing material or form. In some cases the objects of reconstruction already look worn by time.

AH : I am interested in creating a surface that has a unique quality, one that looks like a fabric. For me the idea of the surface is as important as the image itself. The surface for me is like a membrane or an organism that finds itself in a constant state of metamorphosis.

AM : In recent series, you use the lines which are drawn or scratched. The lines are sometimes concentrated, mostly irregular, creating a movement in the work. Are these lines a space dedicated to the imagination of the viewer ?

AH : The lines are mostly scratched out of carbon copy paper or a soft surface covered with an oil stick or pastel. They differ in density. The rhythm of the lines seams sort of seismographic, sometimes creating a dense structure, sometimes a regular one with minimal changes. The lines are not calculated but resonate with an inner flow. It seems an invisible text is written coming from a printer attached. The outcome may slowly reveal or has almost erased the image.

AM : Your works question what can not be directly seen. Would you define your work as an aesthetics of concealment?

AH : We are surrounded and under a spell of images. Yet, some images we ourselves only see exclusively: those of our dreams. So we carry in ourselves a world of images that nobody else has access to, not even ourselves to its full extent. A major part of the creative process is driven by desire, a drive that influences our actions and our perception, which we often unconsciously reveal or consciously disguise.

AM : You created Kojève’s Diary series during your residency at Cité des Arts in 2014 in reference to Alexandre Kojève, a Russian-born French philosopher. For this series, you decided to work on small format, a bit bigger than the size of a sheet of paper. Each work symbolizes a day of your Parisian experience. Do you consider that this work has a specific personal dimension ?

AH : Being relocated in Paris for some months I wanted to work on something on an every day basis in order to get into a flow and to adjust myself starting with something more intimate in size, like a diary. The idea was merely to create a fiction from the beginning, yet using the identity of a real character. This is how the title came up. Kojève, a philosopher and later a politician of the last century had a huge impact on the Parisian art scene. Although I am interested in his persona and his historical analysis the abstract works I made do not refer to him. But finding oneself working in a different surrounding one becomes more conscious of ones own perceptions. Similar to the idea that a diary does not always reveal the very private or personal, it was this awareness of an awareness I was interested in…