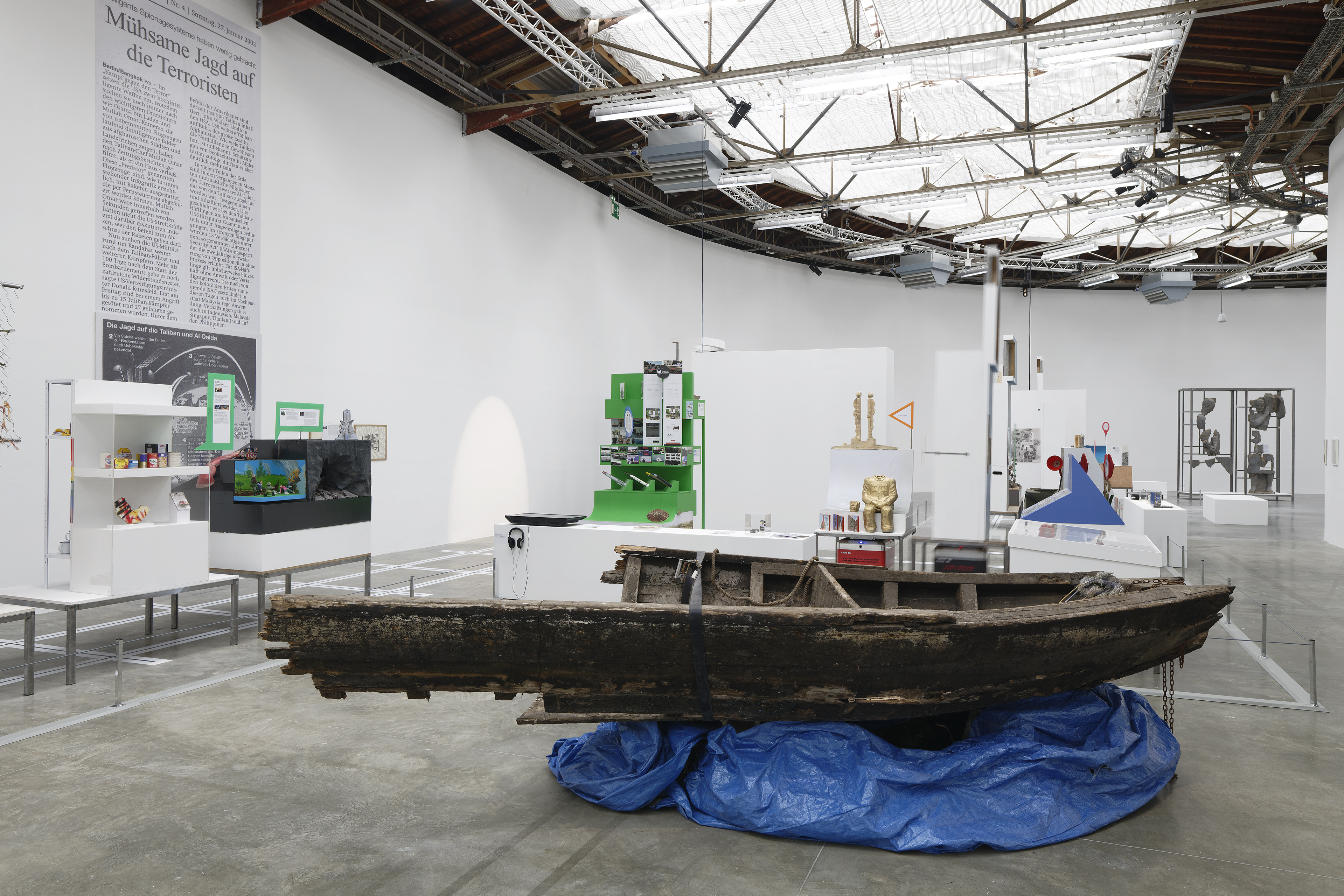 In Paris, it is not every day that you are hit with a racist video on entry to an exhibition. But World Domination, a film by Neil Beloufa found in the first room of His current exhibition L’Ennemi de mon ennemi at Palais du Tokyo does exactly that. For this film, Beloufa street casted several actors from a variety of ethnic backgrounds. He asked them to give an example of a crisis in their home country and to solve this crisis by declaring war on another country. During the film, we see one of the key topics of L’Ennemi de mon ennemi which is the relationships between believable and/or unbelievable political absurdity and between rightly and/or wrongly placed authority.

One visit to this exhibition is simply not enough. It is dense and during your first moments within the space it is difficult not to be overwhelmed. The vast gallery within the Palais Du Tokyo is full to the brim with a pastiche of politically charged gems. These include; artefacts such as a baseball signed by Tony Blair, loans from museums of military history, paintings by the likes of Gustave Courbet, a dagger made by Goya, as well as works by Beloufa himself and his found footage from the internet.

However, as you begin to wade through this syrup of information it is impossible not to become completely sucked into its complexity. Once you have been drawn and held like a moth to a flame to a single artwork, such as the fascinating depiction of an adolescent France in Roman National by Gregoire Beil, you realised that you have only just hit the tip of this exhibition’s iceberg. It becomes clear that the confusing nature of the curation is entirely Beloufa’s intension. This is exaggerated further by the by Beloufa’s robotically controlled display units, which move automatically and randomly throughout the space. This simple kinetic element eradicates a clear start, middle and end to the show, creating an ever changing almost, but not quite, ‘aestheticless’ landscape.

Beloufa’s interest in standardisation is also reflected in the kinetic elements of his works. For example, another video work by the artist found in this exhibition is Nice People. In this video, a combination of actors and genuine people are asked to defend how where they live is the best place on earth. Beloufa describes this as ‘a neo liberal society full of yoga’. This video is displayed within an installation including a projection of the film onto sheets of glass fixed to a steel bar structure. This structure slowly back and forth distorting the projection. Beloufa has shown this installation multiple times before but each time the movement and structure of the installation is different. It is a comment on how, for example we all wear Nike trainers, but each of us may wear a different colour as a cry for individualism.

In this messy confusing viewing experience, it is hard to completely understand what is real and what is not. A total reflection of how, as citizens, we follow and speak with friends about politics today. As a viewer, you leave the space feeling no more enlightened and this is not the point. You will not have been taught a lesson about the horrors of the world or given a solution as to how to fix it. The importance of this show lies in its absurdity. Absurdity in art, absurdity in authority and absurdity of information and given a viewing platform to view these absurdities and ask questions.