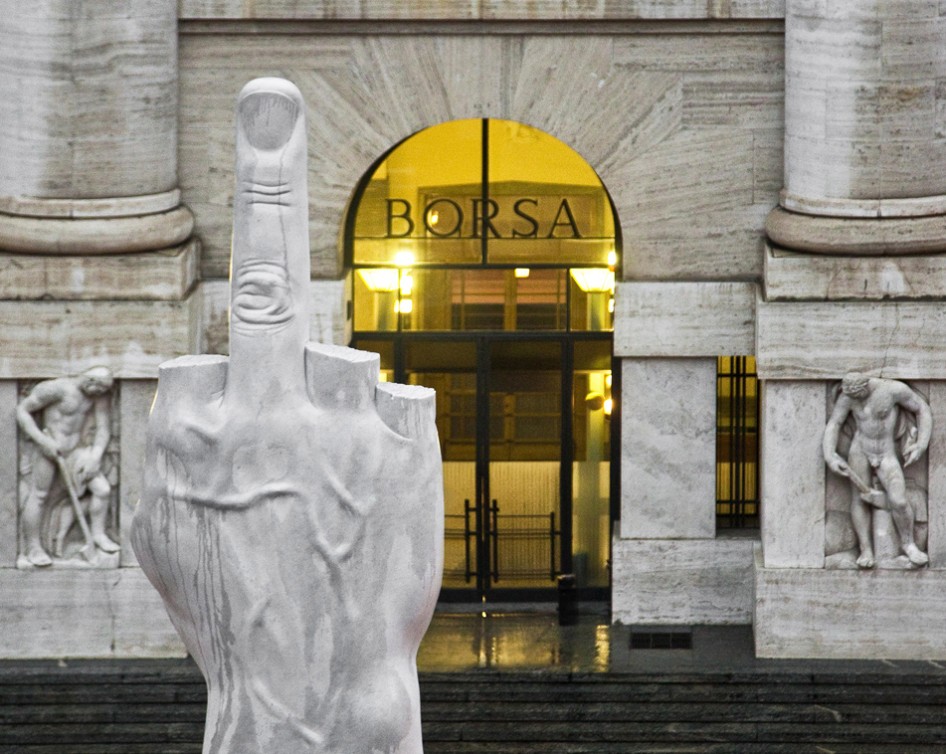 Chris Wiley: For your retrospective All last year at the Guggenheim, you hung every work you’ve ever made from a massive armature in the middle of the rotunda. It was like a giant puppet show or an elaborate mobile—a work in itself. Was this a kind of final prank?

Maurizio Cattelan: Everyone always says I’m a joker but I am always very serious. It gets trying after a while, like being the boy who cried wolf or Cassandra. But, since the works are nothing without their audience, maybe I’m the one who’s wrong. Maybe the joke is on me.

Chris Wiley: Well, if you were serious, what motivated you?

Maurizio Cattelan: I was terrified to have a retrospective. It felt like I was already dead. Who would want such a thing? So I did the only thing that I could do: I hung the work out like meat on hooks, carcasses to be examined. If the museum was going to be a mausoleum, I thought it should at least be one of my choosing.

Chris Wiley: So you think of your old work as dead?

Maurizio Cattelan: I have always trafficked in images; how the works come into being has never really interested me. It’s a chore, actually – my ear is plastered to the phone all day. Once I get an image to materialize though, it’s great. But only for a minute. After they have done their job, shown their faces in public, I find myself wishing that the works could just disappear back where they came from, back into the image-sphere. Unfortunately, they stick around, kicking around shows and cluttering up the corners of collectors’ houses. In that sense yes, I guess they are dead to me. You can imagine then, what a problem it was when they all showed up back on my doorstep, begging like needy dogs. My solution to the problem – once it came to me – was a simple one: to take these tired old images and make a new one which would encompass them all. I think I read somewhere that the Aztecs would sometimes take the skeletons of their human sacrifices and make them into puppets, giving the dead a chance to dance again. 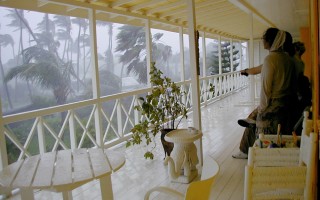 Chris Wiley: In a way All, was also a bold disruption of Guggenheim’s notoriously difficult exhibition space, in the lineage of Mathew Barney or Daniel Buren. Was this a pointed act of putting Frank Lloyd Wright’s space to work for you?

Maurizio Cattelan: I guess you could say it was more of an opportunity than an opposition. It’s like when George Mallory was asked why he wanted to climb Mount Everest and he replied, “Because it’s there.”

Chris Wiley: Wait, but didn’t Mallory die in his attempt to climb Everest?

Maurizio Cattelan: I never claim to be successful.

Chris Wiley: But I guess, in a way, this exhibition did result in a kind of death for you. Close to the time of the opening, you announced that the show was to mark your retirement from art. Are you putting us on?

Maurizio Cattelan: As I said, I am always serious. I went into art looking for freedom and I became a slave to my work. It gets tedious after a while, being chained down, even if the parties are good. More than anything, I just want to escape.

Chris Wiley: Maybe this shouldn’t surprise us, as it does seem like you’ve been saying it for a long time. Your piece from 1992 at the Castello di Rivara on the outskirts of Turin that was a rope made of bed sheets dangling out of the castle that appeared to be left behind by an escaped prisoner. Your 1997 piece of a stuffed ostrich with his head buried in the gallery floor, which reads poignantly as a self portrait. Charliefrom 2003, a boyish, doll-like avatar of yourself on a tricycle that first rode recklessly around the Giardini at the Venice Biennale, as if in a mad dash to escape being pinned down—the list seems endless. So now that you’re retired, are you taking some time to relax?

Maurizio Cattelan: No! It’s crazy. I’ve never had so much work. My advice: don’t ever get retired if you can avoid it.

Chris Wiley: If not art, what have you been working on?

Maurizio Cattelan: Massimiliano Gioni and I have opened a new space in Chelsea called Family Business, which is something like a big brother to Wrong Gallery, the closet-sized space that the two of us ran with Ali Subotnick—there’s more space, but not much. Still, we feel it’s time to grow up and be responsible adults. That’s what having a family business means, right? Also, I have been making a magazine called Toilet Paper with the photographer Pierpaolo Ferrari where we make the editorial photographs we would want to see as advertizing in an alternate universe. Actually, it seems that recently that universe is starting to bleed into our own: we just did a billboard project for the High Line that was very strange—an old woman’s fingers on a blue velvet backdrop, amputated but without blood. 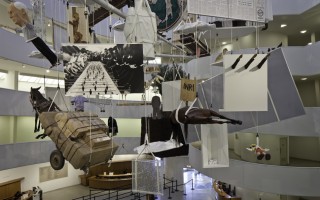 Chris Wiley: It was an odd thing, seeing that towering over 10th Avenue.

Maurizio Cattelan: I thought they looked like beautifully manicured penises, didn’t you? Sometimes symbolism is better when it’s not so subtle.

Chris Wiley: True enough. I am interested though, in why you keep working. Not only have you always been interested in escape—often, as you have pointed out many times, due to your fear of failure—you have also, at least in part, taken up forced leisure as a sub-theme in your work. I am thinking particularly of your never-awarded Oblomov Foundation scholarship, which was named after the famously lazy and indecisive eponymous noblemen of Ivan Goncharov’s 1859 novel, a substantial cash prize that was to be given to a young artist who agreed not to show for a year and the 6th Caribbean Biennial, which you organized with Jens Hoffmann, that gathered a collection of bold-faced names from the biennial circuit for what essentially amounted to a highly publicized vacation-by-invitation. Are you allergic to relaxation?

Maurizio Cattelan: It’s a very hard position. I want to force other people relax, but it is impossible to relax myself. It seems that I am even a failure at retirement. Maybe it’s just not in me; Mark Twain used to write lying in bed but I write standing up. Even when I was younger I had to work while slacking off. I would sit in the back of the class with my pencils and fill sheet after sheet of paper with these really thin lines—I’d draw them so close together, they almost blended into one. For this, of course, I had to keep my pencils very sharp. By the end of the school day my desk would be covered in pencil shavings from my sharpener and they looked like little roses! I think people thought I was crazy. The thing is, when you fear failure, the evasive gesture is always the best gesture: I make art but I don’t make art, I am retired but I am working more than ever. Fully succeeding is just as much a nightmare as being an utter failure. They both feel like voids and nothing scares me more than emptiness.